“We get satisfaction just from solving the puzzle,” explains Scott, “but we also try to take the design to the next level. The form of this building came from a few ideas. One is our interest in reinterpreting the existing fabric of the city. In this case, the tilting out of the living room window acts like a bay.” 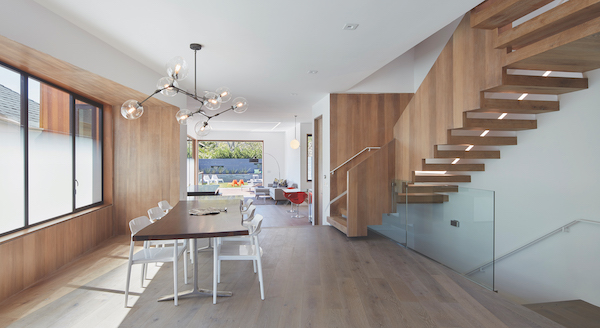 The continuous stairwell opposite the wood-lined light well generates visual interest and subtle room delineation within the open space.

The angled façade also solves two issues: The homes on either side have different setbacks, so Scott designed the house to align with both buildings; in addition, the reinterpreted bay window on the main level reaches out to capture views down the hill, yet avoids direct sight lines into the house across the street.

San Francisco building codes mandate that new structures must preserve any light wells on neighboring houses. To accomplish this, the new house must include a light well spanning at least three-quarters of the existing building’s well. Scott capitalized on the requirement by placing a three-story stairwell—of the same shape and volume— opposite the light well. These voids carved into the floor plan create a natural hinge to subtly delineate spaces within the open layout. Despite the elimination of an overgrown lot, neighbors opposed construction. They even created a website to fight anything being built. Scott and Collins prevailed, thanks to the elegant design. Their ability to work with neighbors and planners to reach an agreement—even when the house already met all restrictions and requirements—also helped. “In this case, there was just a general fear of new building and people who don’t want anything to change,” Scott says. 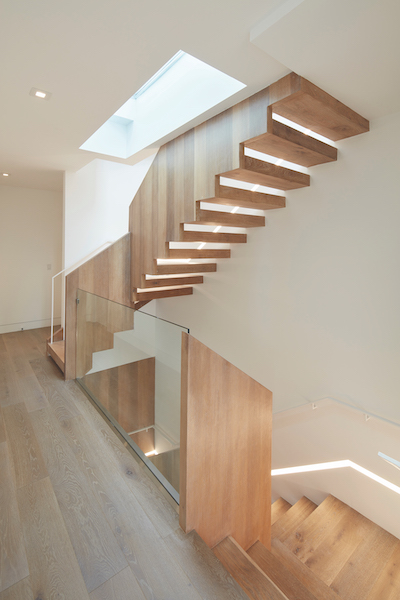 The sculptural, three-story stairwell leads to a roof deck with views of San Francisco Bay.

The cedar-clad, 3,400-square-foot house certainly adds more value to the street than a weedy lot full of raccoons, adds the architect. And the inclusion of sustainable features, such as graywater reuse, rainwater catchment, solar and radiant heating, tankless hot water, and energy-saving smart home systems, possibly benefits the natural environment even more than the former lot. 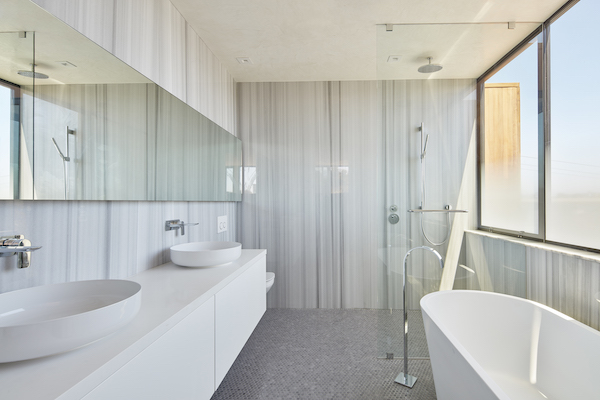 Scott credits Collins for making this project so rewarding. “Work­ing with a builder who’s up for a challenge lets us push the design,” he says. “We knew he could handle the tilted façade and get people to see a bay window not as something just stuck onto a house but as [an angled window] that works to capture views up and down the street.” 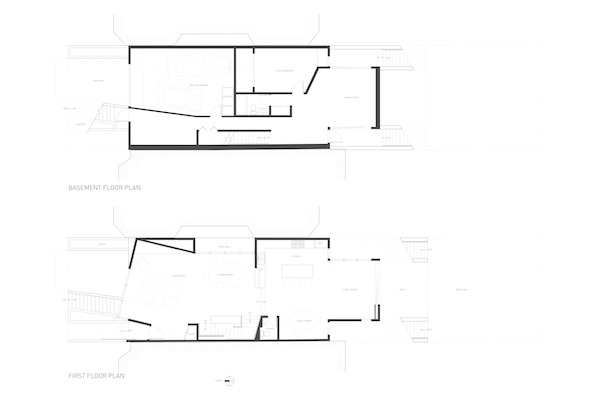 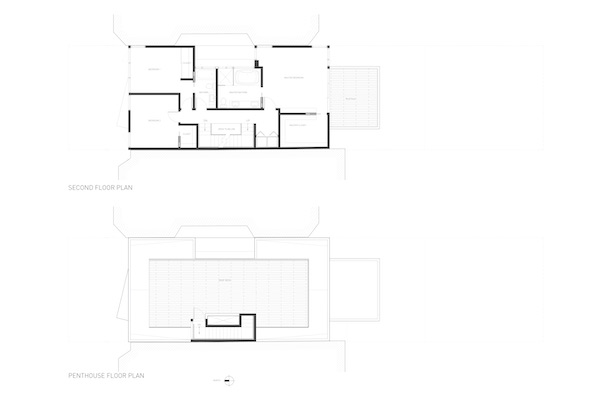 It took three years for builder and developer Farhad Kaziman to execute the dramatically swooped dragon scaled roof on his custom home in Toronto.… Windows and Wood Tie Modern Midwest Home to the Outdoors

An architecture firm designed a modern Indianapolis home with an abundance of glass and greenery to reflect the occupants’ biophilic interest.… The latest project from Studio 804, a design/build course for architecture students at the University of Kansas, brings together aesthetic and environmental ideals Renovating an entire house isn’t always the most economical option, but it offers a host of  other benefits